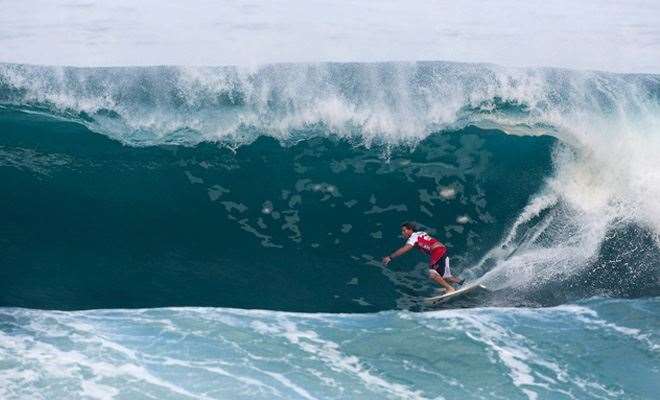 Round 1 of the Billabong Pipeline Masters, Event No. 10 of 10 on the 2009 ASP World Tour, commenced today in clean six-to-ten foot (2 – 3 metre) waves at the Banzai Pipeline.

The third and final event in the Vans Triple Crown (an ASP Specialty Series), the Billabong Pipeline Masters plays host to two dramatic story arcs: the showdown for the 2009 ASP World Title and the requalification race for the 2010 ASP Dream Tour. Amidst the world’s best surfers exists a spattering of Pipeline specialists, making the competition field particularly challenging to navigate.

Michael Picon (FRA), 30, current ASP World No. 39, is in need of an impressive result in the final event of the year to secure his position amongst the world’s elite in 2010. Today, the Frenchman put the rest of the draw on notice, first eliminating wildcard Manoa Drollet (PYF) before posting the highest heat total of the event, a 19.76 out of a possible 20, for a brilliant backhand tube-riding approach to take out Josh Kerr (AUS), 25, in the final heat of the day.

“That was the best heat of my life,” Picon said. “I was just trying to build momentum and I feel like all of the training I’ve done is paying off. It’s great to have this heat at Pipeline and in Hawaii. Today was all about the rights. We all knew that. I was going for the right too. I figured I’d go for the death, whatever.”

To vault himself ahead the current qualification cutoff point, Picon will have to finish third or better at the Billabong Pipeline Masters, but the calculated Frenchman remains calm heading into the remainder of the event.

“I’m trying not to think about it,” Picon said. “I’m just thinking about having a good heat and having a good contest here because it’s always been a dream for me to do well at Pipeline. I’m just really confident after that heat.”

John John Florence (HAW), 16, the Billabong Pipeline Masters’ youngest competitor, was a tour du force in his Round 1 heat, posting an impressive 17.20 out of a possible 20, to defeat fellow Hawaiian wildcard Danny Fuller (HAW), 27.

“With four guys out at Pipe I was going crazy and just trying to get every wave I could,” Florence said. “Yesterday was big and messy and today’s conditions have really cleaned up. This morning was fun, but this afternoon’s wind has made it really good. Growing up here, I really looked up to all the local guys for inspiration and advice out here. To be competing in the Pipe Masters is an honor and I hope I have the opportunity to surf through a few more rounds.”

Florence will take on current ASP World No. 27, Heitor Alves (BRA), 27, in Heat 12 of Round 2 when competition resumes.

Andy Irons (HAW), 31, former three-time ASP World Champion and former four-time Pipe Master Champion, showed a return to form today recovering from an early heat double-interference collision with opponent Marcus Hickman (HAW), 30, and rallying with a dominant performance in the Backdoor righthanders. Although on sabbatical from full-time competition this season, Irons’ return to the ASP World Tour in 2010 has been highly-anticipated by the surfing world.

“I’ve decided to be on the world tour next year and just being in a jersey is a good warm-up for it,” Irons said. “I definitely feel like I’m in a better position going into next season after taking this year off.”

Irons will take on current ASP World No. 25, Drew Courtney (AUS), 30, in Heat 16 of Round 2 when the Billabong Pipeline Masters recommences.

Andy wasn’t the only Irons to make a dent in today’s competition as younger brother and former ASP World Tour campaigner, Bruce Irons (HAW), 30, took down lethal Californian Tim Reyes (USA), 27, in Round 2 of competition.

Torrey Meister (HAW), 21, wildcard into the Billabong Pipeline Masters, was the first nate called to action when Sunny Garcia (HAW), 39, failed to show for his Round 1 heat. Despite arriving late to the lineup, Meister put in an inspired performance in both the Backdoor rights and the Pipeline lefts to net a 16.83 out of a possible 20 to overtake Nic Muscroft (AUS), 27.

“I don’t know what happened,” Meister said. “I expected Sunny (Garcia) to turn up and I was sitting on the beach getting tired watching the waves. It was firing and I couldn’t get too antsy because I didn’t know if I was going to get into the event, but I’m happy that I did. I guess it’s kind of an advantage to get in this way, because I didn’t have time to get nervous before my heat.”

Event organizers will reconvene tomorrow morning at 6:30am to assess conditions for a possible 8am start.

The Billabong Pipeline Masters will be web LIVE via www.billabongpro.com and www.triplecrownofsurfing.com