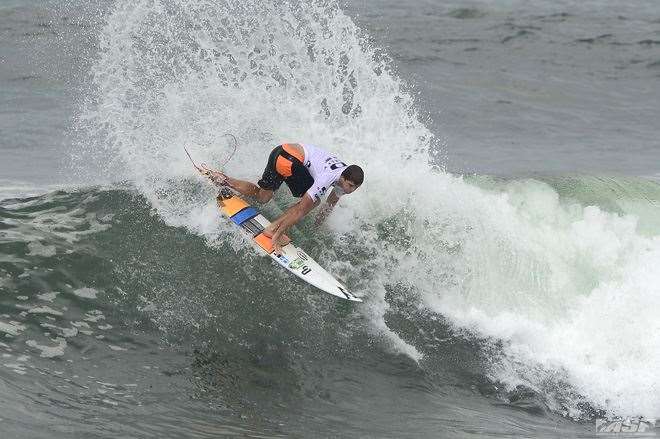 CANGGU, Bali/Indonesia (Saturday, October 6, 2012) – The 2012 Oakley ASP World Junior Championships Bali got off to a flying start at Echo Beach, Canggu today. The world’s best surfers under 21 lit up the 3 to 4 foot (1.5 meter) surf, mixing powerful and progressive manoeuvres, with all the surfers keen to stamp their authority on this event that will be crowning the 2012 ASP World Junior Champions.

Peterson Crisanto (BRA) put on a dominating performance in his opening heat against last year’s runner-up Andrew Doheny (USA) and fellow Brazilian Geovane Ferreira (BRA). Crisanto read the waves perfectly and used his aerial attack to score a near perfect two wave heat-total of 19.00 (out of a possible 20).

“It’s a good start for me,” Crisanto said. “The start of the heat was slow, but then I did an air and the judges gave me a 9.33. Then I tried to keep busy and I caught a wave in the last minute of the heat and got another 9. I don’t know why, but I was nervous before, so I am pretty stoked to be through to Round 3. Canggu is like my home break, it’s pretty much my favourite place to surf in the world.”

Ryan Callinan (AUS) clocked an impressive heat win that will see him skip Round 2 and advance directly into Round 3. The young surfer from Newcastle, Australia has had a bad run of injuries over the last 12 months, but appears to be back in form after today’s heat win.

“That first heat is always nerve racking for me,” Callinan said. “I don’t think I’ve won in Round 1 at this event before, so it feels really good to leapfrog Round 2. This is my last year as a junior and I want to do well. I went terribly in some competitions in Europe this year. Not many people know, but I hurt my knee and it probably wasn’t a hundred percent. It felt really good out there today, so that gives me a lot of confidence.”

“I just wanted to wait out the back for the really big ones,” Huscenot said. “There were some good waves, with some good walls and I managed to find them. This is my last event competing as a junior, it’s funny because you start so young and time goes fast and it’s over pretty quick. I’m stoked to have already won an ASP World Junior Title and hopefully I can do it again this year.”

Connor Coffin (USA) survived a slow start to his Round 1 battle against Deivid Silva (BRA) and Taylor Clark (USA) who finished second and third respectively. Coffin went to work in the second half of the heat and used his stylish flow and carves to jump to the lead and advance directly to Round 3.

“I had a bad start to that heat so it feels good to get the win,” Coffin said. “I love this event, it’s my favourite event of the year. This is my third time here and I love Bali, I’m here with my family and I’m feeling good.”

Vicente Romero (ESP) the Brazilian born, but Spanish raised surfer caused the upset of the day when he defeated reigning ASP World Junior Champion Caio Ibelli (BRA) in an action packed heat. Romero scored a near perfect 9.93 (out of a possible 10) for a beautifully surfed wave with powerful carves and a massive aerial.

“I’m from Barcelona, but I was born in Florianopolis Brazil,” Romero said. “But I live in the Basque Country, close to Mundaka because there’s no waves in Barcelona. I’m pretty stoked with that heat, defeating the current ASP World Junior Champion. That wave was pretty clean, I did a good move first and a big air and I gave it my best. Today is my first time surfing in Canggu and I’m happy it went well for me.”

Ezekiel Lau (HAW), a Quarterfinalist at this event last year, used power carves and a monster air to edge out Arashi Kato (JPN), by a mere 0.20, with Italo Ferreira (BRA) finishing not far behind in third place.

“This wave is made for punting airs,” Lau said. “I’m feeling confident this year, I feel like I know the waves, the place, the food and everything better. I’ve been working real hard to get in shape for this event. I went on a few surf trips and then spent some time at home preparing. I’m feeling good, so hopefully I can take the title home.”

“That was the first surf I’ve had out here at Canggu this year,” February said. “I got a couple of good ones so I’m really happy. This place is well known for it’s air sections and the wind was good too. I saw that I was up against Keanu (Asing) and I was kind of nervous, but all of the heats are hard in this competition. That win gives me a lot of confidence going into the next round.”