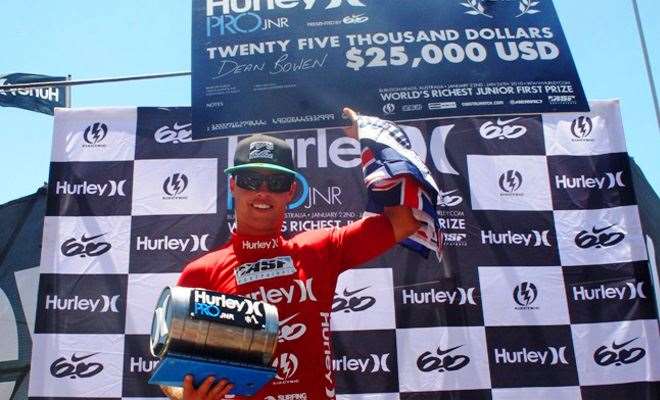 “I’ll definitely be having a few drinks tonight with family and friends, and possibly take a quiet little trip to the Gold Coast casino,” an excited Bowen, 19, said.

“The Hurley Burleigh Pro Junior is easily one of the best junior surfing events in the world and despite not being able to surf the famous waves of the point this year, its still been a great event and Hurley definitely know how to put on a show,” he said.

Meanwhile for Friend, it was a bitter sweet day with the likeable natural-footer (left foot forward stance) not quite having enough gas to get him over the line in the Final.

“To come so close and not be able to walk away with the USD$25,000 is disappointing, but in saying that placing second is still a great result,” Friend said.

“Dean (Bowen) is such a competitor in the water and he’s as Aussie as they come, so it’s great an Australian walked away with the cash in the end,” he said.

With four Australian surfers competing on the final day, the end result was always going to spark patriotic celebrations, however, Bowen’s win did spoil the party for the local contingent, as three Queenslanders including Blake Ainsworth (Coolangatta, Qld), Mitch Crews (Currumbin, Qld) and Chris Friend were eliminated in the semi-finals and final respectively.

All is not lost for 19-year-old Mitch Crews, with the Gold Coaster attaining the number-one position atop the ASP Australasia Junior Men’s ratings, holding a 770 point lead over his nearest rival Davey Cathels (Narrabeen, NSW).

Visit www.hurleyprojnr.com for news, photos and updates relating to the 2010 Hurley

Burleigh Pro Junior with plenty of action from the event’s Australia Day celebrations.