Dion Atkinson crowned number one surfer in the land 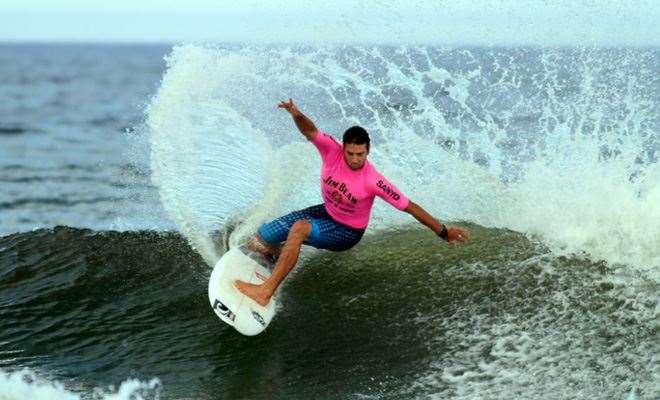 Seaford’s Dion Atkinson has been crowned Australia’s number one club surfer after taking out the Jim Beam Boardriders Cup in classic one metre waves at North Narrabeen beach.

Adelaide’s Atkinson attacked a big right hander in the dying minutes of the final, scoring a nine out of ten from the judges to bring his total to 15.1 points, enough to claim the event that saw the club champions of Australia’s top 44 boardriding clubs battle it out for the more than $5000 on offer.

In a seesawing final that saw three different leaders over the last ten minutes, East Corrimal’s Nick Squires was second on a count back from Cronulla’s Dylan Hannah with 14.5 points, while Margaret River veteran Dave McCauley was fourth (8.5).

It was an exhausting day for the finalists having to hit the water for 20 minute heats five times but Atkinson said he tried to remain patient each time and the tactic paid dividends.

“I said to myself there’s a lot of time to get two (scoring) waves in the twenty minutes and I made sure I waited until there were good waves and I got one,” Atkinson, who finished 23rd on last year’s World Qualifying Series, narrowly missing the main world tour, said.

“My legs were struggling when I got that good wave at the end and I was feeling it but I started with a good turn and decided to put everything into it.”

Atkinson put his good form down to a great early start to the year on the WQS circuit where he recently finished ninth in the six-star prime event in Brazil.

“I came straight here from the WQS event in Brazil where I had a pretty good start to the year,” Atkinson said.

“I wanted to start the year well and get into it and back into the swing of things early in the year and now it has started well.”

The talent on display at the Boardriders Cup was the perfect appetiser for the weekend’s Jim Beam Surftag Australian Championship that will feature country’s best 24 Surftag teams including traditional powerhouses Kirra, Snapper Rocks, Margaret River, Merewether, North Narrabeen and North Steyne battling it out for the more than $40,000 on offer.

The event sees five-member teams given an hour in which each individual must catch three waves, with the second being a “Powerwave” worth double points. All three waves for each surfer count in the scoring and bonus points are awarded for teams that finish before the 60 minute mark.

For more info go to: www.globalsurftag.com

The post Dion Atkinson crowned number one surfer in the land appeared first on Tracks Magazine.