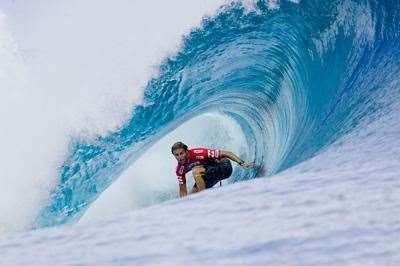 COOLANGATTA, Queensland (Wednesday, June 3, 2009) – The world’s best surfers, the gents of the ASP Top 45 and the ladies of the ASP Top 17, make their collective livings by pitting themselves against the elements. Forever pushing the boundaries of high-performance athleticism as well as risking life and limb in some of the most exotic locations on the planet, our surfers are not impervious to injury.

Australian style master Luke Stedman, 32, had a banner year in 2008, finishing an impressive 11th on the prestigious ASP World Tour and looking poised to make a dent in 2009. In fact, since his return to the ASP Dream Tour in 2005, the Sydney-sider has improved each season (36th, 25th, 16th and 11th respectively), with a good chance of a Top 10 finish this year. However, a late season injury in Hawaii has put Stedman on the disabled list thus far in 2009, and only recently has the journeyman campaigner been making rehabilitation progress. ASP caught up with Stedman to get the scoop on what happened, how he’s coping and what lies ahead. This…is our story…

ASP International: Hey Luke, hope you’re well. Could you please provide us with a bit of background on how you were injured? When? Where? The specific diagnosis?

Luke Stedman: This injury has been a recurring one for me. It’s happened both times in Hawaii while surfing. This recent time I did it has been way more serious and painful, but I initially thought I could do a similar rehab to last time to get back to 100%. Unfortunately, I was wrong. After five weeks of pretty intensive physio and rehab, I got an MRI scan because I wasn’t healing and felt there was a more serious underlying problem. So I spoke with Dr. Warren Kramer (the surgeon that did Richie Lovett’s prosthetic leg). He assessed the injury and spoke with a colleague of his, Dr. Smith – an orthopedic surgeon, and both agreed that without going under the knife, the injury would never heal and keep breaking down like an old car. So my surgery was to treat a Plantar Plate Disruption with the Medial Sesamoid Proximally Displaced. This is the bone under your foot that connects to your big toe.

ASP: What has the rehabilitation process been like? Where have you been recovering? Specific exercises? Current health level?

L.S.: I have only been able to start rehab last week because of the surgery. I have been in an air boot for the last two months, which is such a pain as I feel like I’m a Stormtrooper, but it keeps my foot fully protected. I saw Chris Prosser last week (ASP pyhsio) and he set me up with some exercises. My trainer Jan Carton has also set me up with a program. I have a million different exercises, but it’s not anything I’m not used to. I’m super rested and so amped to get back in the water. I really had to stop doing everything so I have all this energy now and just want to get back in the water ASAP. This has been, by far, the longest time I have ever spent out of the water.

ASP: When not rehabbing, how have you been spending your time?

L.S.: I’ve been watching so many movies – haha. I have to keep my foot elevated as much as possible and the boot just makes you not want to walk around. I have been eating heaps, but I still can’t put on weight – haha.

ASP: Have you been watching the events via web this season? What are your general impressions of the surfing, the rookies and the ASP World Title race thus far in 2009? What do you think of the new ASP format?

L.S.: To tell you the truth, I can’t watch the events. I get really frustrated that I’m not there and it gets me in a little bit of a bad mood. I had such a good year last season so I really wanted to build on that. I decided that while I’m out, I would really take a break from the tour and just work on getting myself back on track. I now feel really rested and super pumped. I know that when I come back I’ll be 100% and want to surf as well as I can again.

ASP: When do you expect to return to competition? Have you been surfing yet? How has it felt?

L.S.: I hope to be in the water in about three weeks. I can start to paddleboard hopefully in two weeks. I can’t wait to just ride a wave. I hope I can still do it – haha.

For more on LUKE STEDMAN, check out his ASP WORLD TOUR PROFILE