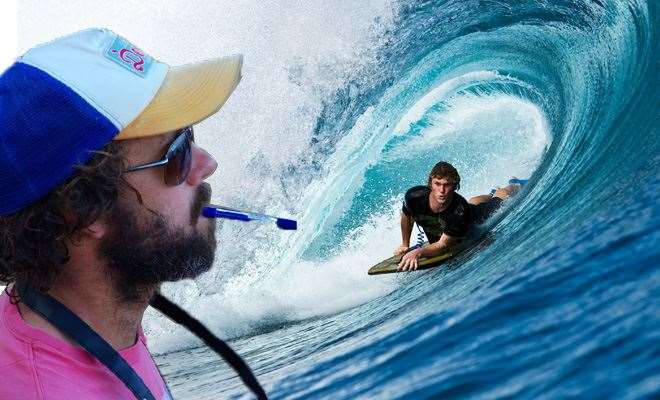 Luke Kennedy contemplates the possible ramifications of his actions.

While enjoying the recent drought-breaking east swell on the east coast, I found myself in a surfing dilemma. As I made way to shore a body-boarder complained of a lost flipper.I offered my condolences but secretly revelled in the fact that it probably meant more waves for me. Sure enough as I paddled through the inside section, there it was, that flapping bit of rubber that changes lidders from floating tofu into wave-catching machines. What was I to do? If I left the kid as a rubber amputee then I was arguably be performing a valuable service to my fellow stand up surfers. However it felt like a bit of a C#@t act to simply ignore it. Eventually I acquiesced and grabbed the flipper. Getting it in was actually a struggle. I dare not put it on for fear I might somehow be cursed. Instead I wedged it between my teeth like an obedient rover who’d been sent to fetch a stick. I made it to shore and handed the beaming kid his prosthetic flapper. I still wasn’t sure I’d done the right thing.

The next day I arrived late at the same beach. It was pumping and getting dark quickly. Unfortunately I only had a leg-rope string that was thicker than a thumb and a board with a tiny eyelet. I fumbled in the fading light for a full twenty minutes trying to get it through the hole [yes a little like other types of failed attempts on the beach]. Finally I gave up and asked a surfer who’d just come in if I could borrow his leggie string. “ Yeah, sure,” he replied, sensing my desperation. I made it out in time for a couple of good waves and as I came in I couldn’t help but think that karma had paid me back.

A couple of other surfing dilemmas.

The best wave of the day comes through. A hot chick has the inside but you know she is only a 50% chance to make the drop. Do you Go?

Surfing against your best mate in a local comp. You realise he has run down with the wrong coloured jersey. Do you let him know or not?

A top ranking pro paddles out at a break where neither of you are local. You have the inside but a bomb comes through and he starts paddling. Do you call him off?

A car-load of body-boarders has broken down on an empty stretch in the middle of bum-fuck nowhere. Do you stop and help or throw brown-eyes out the window?