South African Jordy Smith letting his back foot do all the talking. Pic: MrPrice/Cestari

ASP World No. 5 and defending champion Jordy Smith (Dbn) came off the back foot taking down formidable wildcard Sean Holmes (CT) in the powerful three-meter surf during their round three decider at Surfers Beach.

The well scripted match-up between two of South Africa’s most stylish surfers saw the pair going wave for wave, unleashing their powerful surfing styles on the open faced walls that saw Smith advance in first place with 15.33 to 14.00 (out of 20.00).

“I knew it was going to be a tough heat,” Smith said. “Sean is really good on right point breaks, especially when it gets bigger. Anything over three feet and he’s lethal so it was a relief to get through that one.”

While Holmes took an early lead off 6.5 and 7.5 (out of 10) scores for his critical in-the-pocket surfing, Smith eventually answered back with his risky lip bashes, fins free wafts and classic power gauges earning 8.19 and 7.23 scores to snatch the win from Holmes.

“I battled in the beginning, things weren’t really going according to plan but luckily I seemed to find my feet halfway through the heat,” Smith admitted. “There are a lot of guys out to win this event, it is coming down to crunch time on the rankings and the guys are going hard, so it’s only going to get harder from here.” 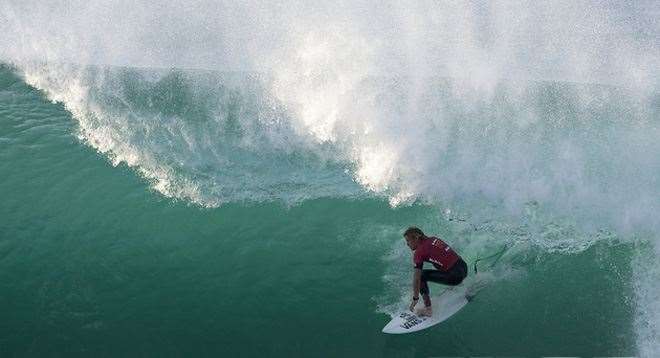 Brazilian surfer Jano Belo produced the most critical last minute win over standout barrel-rider Richard Christie (NZL). Clawing his way back into contention after Christie opened with a near perfect 9.20 double barrel, Belo stormed to victory posting 7.17 and 8.0 scores in the dying seconds to knock Christie off the winner’s block.

“It was a tight heat, when I saw Richard’s big barrel I thought that was 10 points,” Belo said. “I was lucky the judges seemed to like my turns and my last turn was huge so I knew it was going to be a high score.”

ASP World No. 27 Patrick Gudauskas (USA) sent South African hopeful Brandon Jackson (DBN) packing. Despite an early 8-point ride from the South African, it was Guduaskas’ quick in-and-out barrel on the hooter that earned him the 5.93 he needed to advance in first place.

“I saw Brandon get that good one and I was cursing out the back that I’d let him get it,” Guduaskas said. “I found that barrel with five seconds remaining but I couldn’t tell what it was going to do, so I just held on and luckily I came out.”

Heath Joske (AUS) posted one of the day’s biggest upsets, edging out event standout and World No. 17 Gabriel Medina (BRA). Opening up with an 8.83, Joske proved the inform surfer of the heat, backing it up with a 6.67 for a well–deserved spot into Round 4.

“Gabriel has been on fire all year and he’s an amazing surfer so I was really nervous going into that heat,” Joske said. “That first wave was a real boost and I’m glad I went through. This is my best result this year.”

Junior Faria (BRA) managed to get one up on fellow countryman Wiggolly Dantas, advancing off just one solid scoring ride.

“I was sad because Wiggolly is a good friend of mine but this is an important event for me, probably the most important contest of my life right now so I’m happy it went my way,” Faria said. 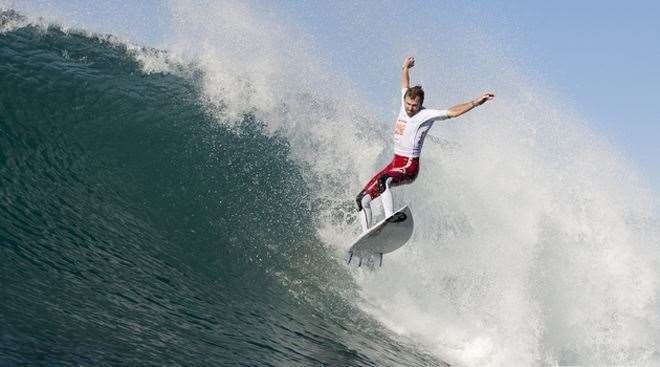 Australian Blake Thornton found himself the wave of the day against former ASP World Junior Champion Maxime Huscenot (FRA). Tucking into one of the longest barrels of the event, Thornton posted a near perfect 9.63, his victory offering some solace after breaking a total of three surfboards at this event so far.

“I paddled out a lot further down than normal and when the heat started that thing just stood up and I was lucky to come out,” Thornton said. “That was the only good part of the heat because I couldn’t find another wave and then I broke another board.”

Tour veteran Kieren Perrow reveled in the man-on-man competition. Taking control of the heat from the get go, Perrow edged out fellow Australian Nic Muscroft.

“I was really excited for that heat, I love surfing man-on-man heats because surfing is at that level where you want to be able to catch the waves you want and surf them as good as you can,” Perrow said. “The level at the Prime events is really high, the young guys coming through are absolutely ripping and I enjoy surfing against them because it really pushes your surfing.”

To watch the event LIVE log on to http://www.mrpricepro.com/

The post Down to the Wire at the ASP PRIME Mr Price Pro Ballito appeared first on Tracks Magazine.