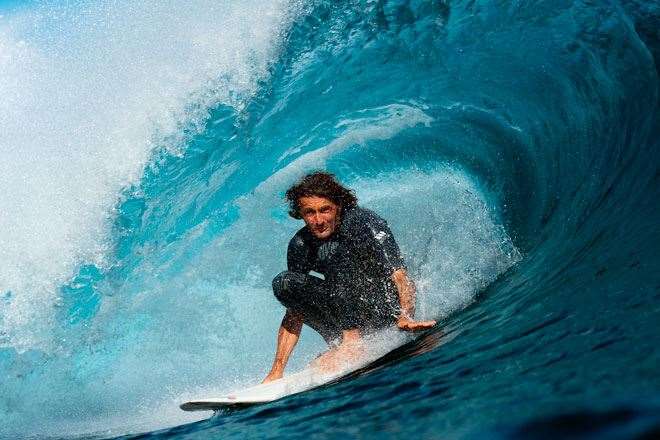 The dark mutterings had begun just after dawn around the smouldering remnants of last nights campfire and then through-out the day.
The surf was holding in a gorgeous pattern of overhead offshore mornings and back-lit evening surfs. By any analysis the trip was on track to be a success: we’d plunged the knife deep into the beating heart of the desert experience and become blood brothers with all that surrounded us. But something was eating Hynd, not all was sweetness and light by the backlit evening session. There was grumbling before the sunset that the rigour and purity of finless surfing in the desert was being compromised, particularly by the exquisite fish surfing of Ryan Burch from Encinitas. That irony, that the modern day instigator of the fish renaissance was rebelling against their use, was not lost on certain observers.
Around the campfire that night there was music and rejoicing. Steve Pigrim from Broome and Mark Atkins of local blood were on fire with song and didge. 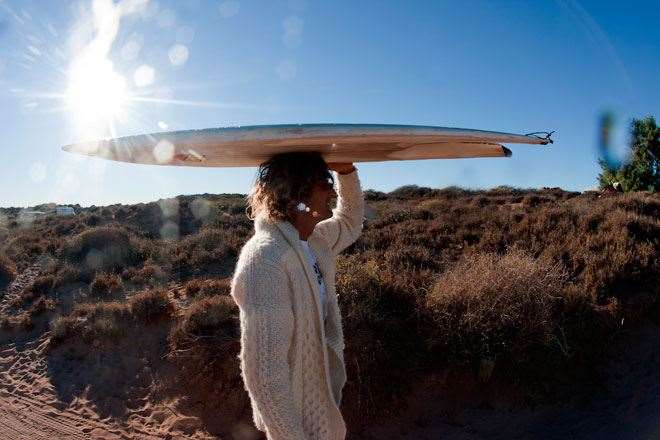 Guided by his on competitive drive to improve on self Derek stays engaged with wave riding. Pic: Ed Sloane

But under the stone hut a storm was brewing. Dane Beevor, a man unafraid to take on the demon drink had a “discrepancy” with Hynd over Beevors opening wave: a barrel that had seemed to shut down on Dane before Hynd took off. Beevor thought he should have received the benefit of the doubt and the conversation became intense.

Without warning Hynd unleashed a drunken tirade on one of the camera-men, accusing him of sloppiness and neglect, then turned his withering scorn on the Director Mick Sowry, a man of exemplary gentleness and honour. 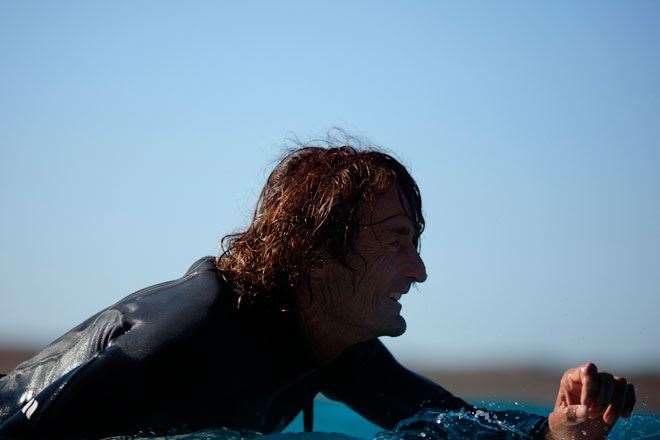 In the light of day dark shadows are small and insignificant. Pic: Ed Sloane

“You, conciliator!”, he shouted, raging that Mick had not been more dictatorial in maintaining a pure fins free experience.
“Settle down Derek”, said a somewhat innocent bystander named Mim.

The music had stopped and the heretofore harmonious vibe of the camp stood like a shattered vase on the ground. Surely there was no way to rebuild the delicate container which had been constructed to capture the living beauty of thought and art.

The tirade continued with tears and emotional meltdowns into the night before ending in a drunken pass-out mid pack-up sometime after 2am.
The next morning the vibe was tense and expectant. Would Hynd make good on his promise and blow this popsicle stand, leaving in a cloud of chagrin and disappointed expectation? Sometime mid-morning a hunched figure in a purple-tinged woollen lumberjacket emerged from the camper. Without preamble he approached Sowry and launched into a passionate apology, blaming the drink for opening a portal into a dark and evil dimension which had unleashed the demons within. Hynd went around the camp, meticulously apologising and recreating goodwill where there had been rancour. He wanted redemption he claimed and the ocean was to offer him a chance. 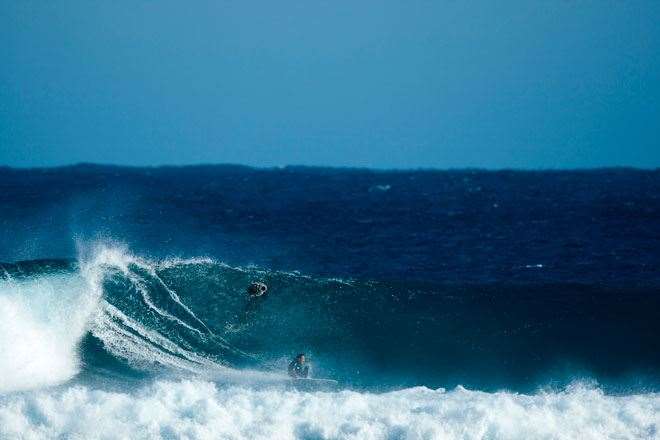 Somewhere up the reef was a shallow, spitting left with a mostly close-out regime punctuated by wide-open freight train sections. It looked heavy and with a thumping hangover Hynd took it on.

I felt for the guy, I really did. At the beginning of the trip he had proclaimed there would be no backdown, no soft options. Finless surfing the heavy desert lefts had been seen a priori as courage, desperation or madness. Hospital was to be preferred to turning the other cheek when the sets thundered in. But surely that was premised on being in the land of the healthy and vibrant. Hynd looked frail and forlorn paddling across the lagoon and I worried about his personal safety. He was hurting, of that there was no doubt. 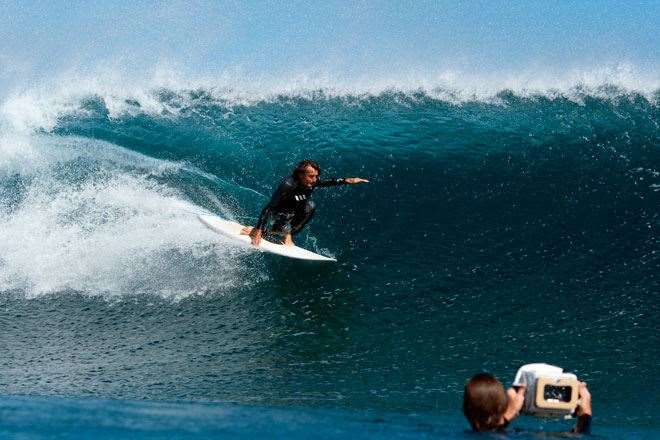 There was jockeying to find the take-off amongst boils and shallow coral heads that sat like fanged beasts beneath the gin-clear water as the tide drained, threatening to turn the surf into a suicide session. Hynd took a wave and pulled into a vicious close-out, then did it again and again before stringing together a brace of successful rides, pumping through shallow sections like an Irons brother on a Tahitian reef. It was a biblical display of self-flagellation. He’d walked his own dusty desert road to redemption on some velvet morning. Improbably the container had been put back together again. 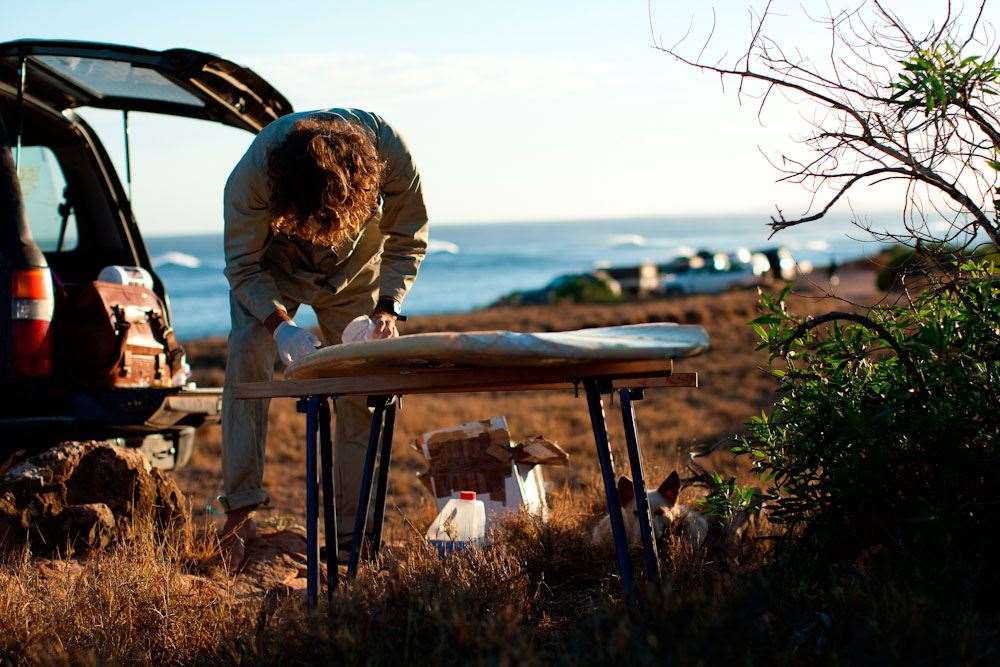 Another day, another set of fins to remove. DH, unclips another crafts wings. Pic: Ed Sloane

Somewhere the gentle strains of Simple Ben drifted over the lagoon  as Hynd paddled in, his hungover face twisted into a sardonic grimace relaxed into a smile as he heard the words: “I’ve seen the best and worst that we have here on our Earth, I’ve finally decided on the things that I give worth”.
Storms rage at sea and the chaos can be destructive but the energy becomes refined and transmutes into perfection on far-off shores. Ultimately the project will be remembered for the marriage of music and the art of surfing and the tempest of human emotion will be sublimated into the greater whole. 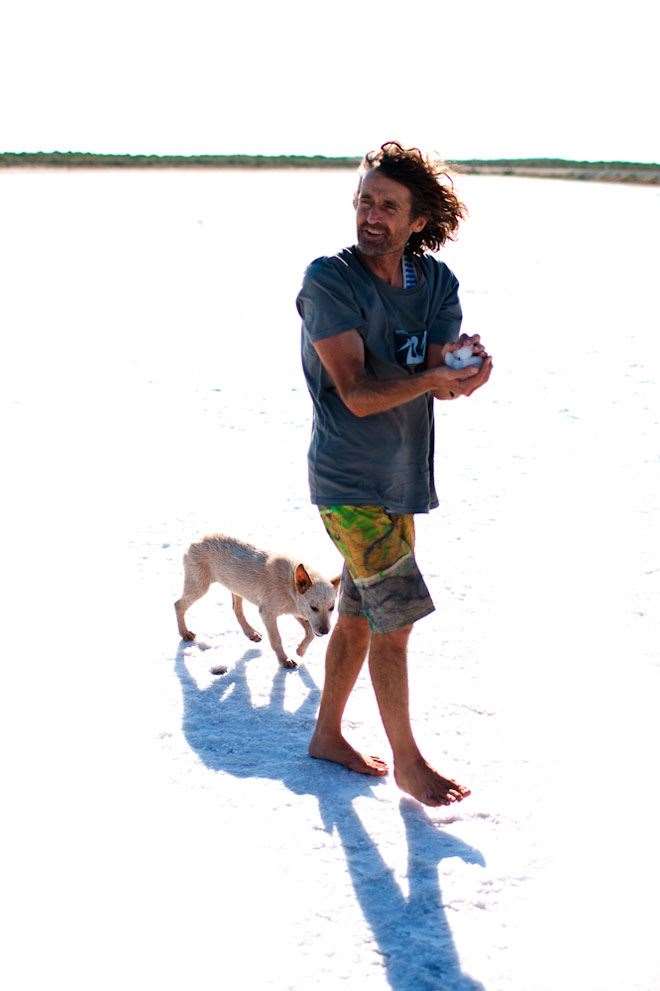 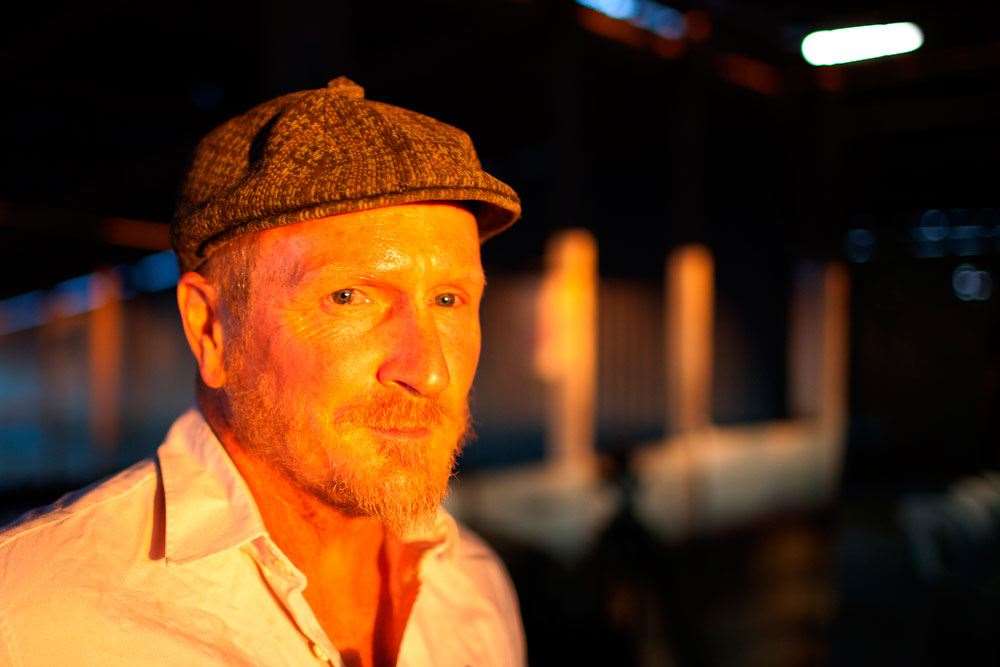 Your author Steve Shearer gets caught in the light. Pic: Ed Sloane