The Association of Surfing Professionals (ASP) North America Pro Junior Series is about to see several regional campaigners do battle at mainland America’s only East Coast event on the 2009 calendar with the ASP Grade-1 Fins Pro Junior at 16th and Ocean in Belmar, New Jersey from September 11 through 13, 2009.

ASP North America Pro Junior Series competitors are looking to compile their top four results to finish within the top thee on the ratings to qualify for the Billabong ASP World Junior Championships held in Narrabeen, Australia each January. 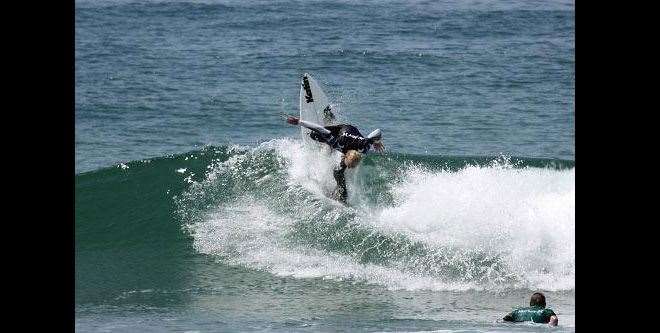 “I’m definitely happy to finally have one event on the East Coast,” Dunphy said. “Although it’s only a Grade-1, I would still love to do well and get some confidence going since I haven’t done that well so far this year.”

Hunter Heverly (Emerald Isle, NC), 19, is another East Coast talent who is out to do some damage in the North East event. Heverly has spent some time competing in New Jersey in the past and is hoping his finely-tuned equipment will help carry him to a solid result at the Fins Pro Junior.

“I have surfed a lot of contests up in the North East and they always seem to be a lot of fun,” Heverly said. “The waves are very similar to my home town, punchy and powerful beach breaks. I feel like I have an advantage in East Coast surf, especially with the new Sharpeye Glider model surfboard I’m bringing up there.”

Heverly is also looking forward to competing in the only event on America’s East Coast this year and expects the deep talent pool to shine at the upcoming event.

“I’m very excited about the New Jersey contest,” Heverly said. “I wish we had more contests on the East Coast, we have a huge talent pool over here and I’m sure everyone is going to be hungry for a final. Traveling takes a lot out of you, so I’m stoked to be here competing on the right coast again and hopefully there will be fun waves and nice weather.”

Although the Fins Pro Junior’s ASP Grade-1 status will not offer up the maximum amount of points towards qualification for the Billabong World Junior Championships, East Coast talents such as Nick Rupp (Ocean Isle Beach, NC), 16, will be looking to claim the bragging rights over his fellow competitors.

“Since it’s the only East Coast Pro Junior I’m really psyched,” Rupp said. “I finally don’t have to go all the way across the country to surf an event and its hurricane season, so hopefully the waves will be good for it.”

Rupp, who is a top seed entering the contest, knows a win will be no easy task however, as he will have to battle through the tough group of local New Jersey surfers who will be hungry to claim the Fins Pro Junior in front of their local crowd.

“I think the only advantage I have is starting in a higher round because I think the kids that live in New Jersey are the ones that are going to do well in the contest,” Rupp said.