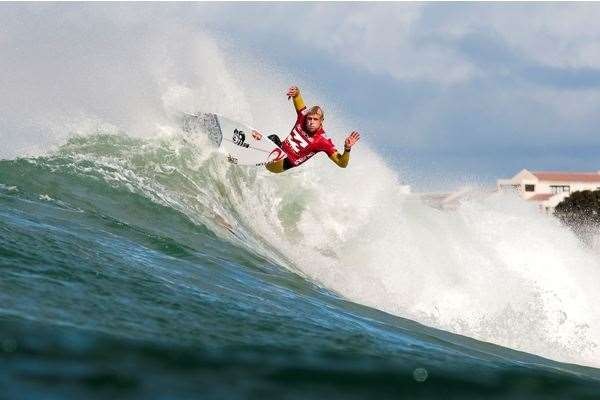 Mick fanning’s form caught the eye of many of his fellow top 45 competitors. One to watch for sure! Pic: ASP

With clear skies, idyllic surf and the world’s greatest surfers on hand, Round 1 of the Billabong Pro Jeffreys Bay saw the 2010 ASP World Title Race reignited with the top seeds putting in sensational performances.

Mick Fanning (AUS), 29, reigning ASP World Champion and two-time past winner of the Billabong Pro Jeffreys Bay (2002, 2006), kick-started his 2010 campaign in fine form today, lacerating the pristine walls of Jeffreys Bay with the highest heat total of the event, a 16.70 out of a possible 20, to advance through to Round 3.

“The conditions changed a bit in our heat and we were slightly out of sorts,” Fanning said. “We were all hunting for the barrel because a lot of the previous heats had them, but they didn’t pan out for us. After I readjusted to the conditions, I was really focusing on my turns and if a barrel presented itself, I would go from there.”

Currently ranked No. 4 in the hunt for the 2010 ASP World Title, Fanning is confident in his ability at Jeffreys Bay and looks to ignite a similar form that saw him steam to world No. 1 in 2009.

“This year, you have to take every heat seriously,” Fanning said. “There are so many threats and even the rookies can do damage. I feel like I’ve been surfing well all year and I’m just focusing on every heat, and hopefully that takes me to a solid result.”

Jordy Smith (AUS), 22, current ASP World No. 2, showed the world just why he is the most dangerous man in South Africa, comboing opponents Tom Whitaker (AUS), 30, and Joan Duru (FRA), 21, with a 16.37 out of a possible 20 for an effortless display of forehand power gouges and beautiful tube-riding.

“I think the only kind of pressure that exists is that which I put on myself,” Smith said. “Winning last week in Durban was a great feeling, but this is where I love to be and getting to surf firing Jeffreys with only two other guys out is an incredible experience.”

Representing South Africa alongside fellow ASP World Tour campaigner Travis Logie (ZAF), 31, Smith enjoyed the full support of the locals today, who broke out their Vuvuzelas to cheer on their countrymen.

“Being No. 2 in the world and in South Africa is an interesting feeling,” Smith said. “Obviously I want to get a good result and make my country proud, but all that really isn’t on my mind when I’m out there and Jeffreys is firing. All you can think about it surfing your best. Hopefully I can continue the momentum throughout the next few days.” 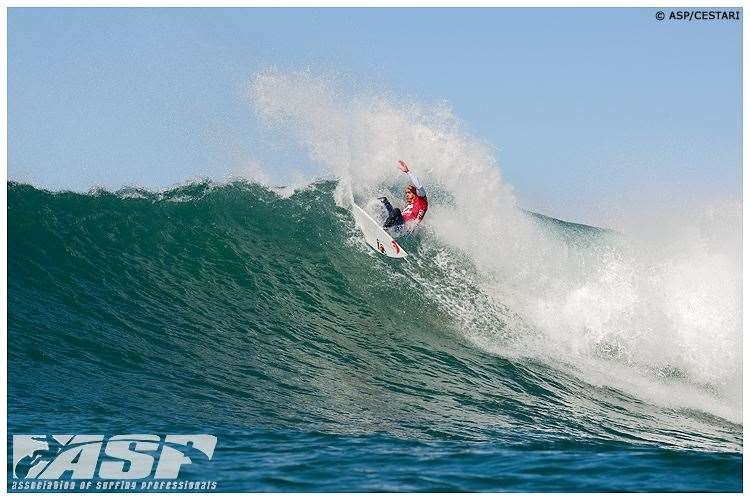 Despite a rough trot getting to J-BAy, once amongst the line up Kelly was feeling a-okay. Sitting wider and catching plenty. Pic: ASP

Kelly Slater (USA), 38, former nine-time ASP World Champion and current ASP World No. 1, nearly missed his opening round heat today, suffering a bevy of travel delays only to arrive this morning. Despite the delay, the iconic natural-footer proceeded to put on a Jeffreys Bay clinic, hunting barrel after barrel, blasting off the top and executing carving 360s.

“Everything that could have gone wrong on my trip over here did,” Slater said. “My flight got delayed on the East Coast because of storms, and then there were mechanical failures and more delays. I had to overnight in Johannesburg and then my bags didn’t show up. I think it took me 40 hours door-to-door and I only arrived this morning. That said, sometimes all that happens for a reason and I ended up having a fun surf there and getting through Round 1.”

Currently sitting in the No. 1 spot in the hunt for an unprecedented 10th ASP World Title, Slater is firmly in the driver’s seat and looking for another solid result at the Billabong Pro Jeffreys Bay.

“They’re all important events to get results at but you definitely know when you need to strike,” Slater said. “It’s approaching the middle part of the year and you definitely don’t want to be picking up any throwaways. You want keepers from here on out and Jeffreys has historically been a venue where I can perform.” 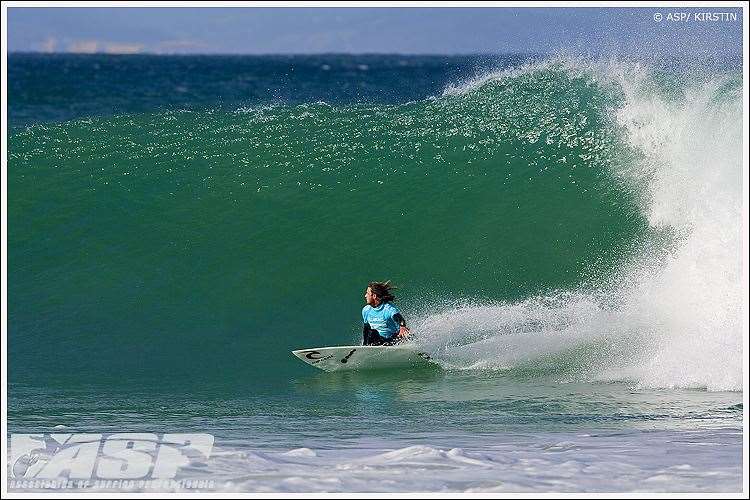 Matt Wilkinson (AUS) was on fire, blazing off the top and scorching off the bttom with lightning speed. Pic: ASP

While the ASP World Title Race took center stage today, coming a close second was the dramatic battle to survive the mid-year cut-off from the ASP Top 45 to 32.

Andy Irons (HAW), 31, former three-time ASP World Champion and past winner of the Billabong Pro Jeffreys Bay (2004), returned from his 2009 sabbatical with a vengeance today, seamlessly threading the barrel and mixing it up with his signature forehand blasts to advance to Round 3 past Jay Thompson (AUS), 27, and Jadson Andre (BRA), 20.

“J-Bay is a special place for me,” Irons said. “I’ve had some of the best results of my career here and I’ve also had some of the hardest losses. To come back here after taking last year off and to get such amazing surf for Day 1 is a great feeling.”

Currently rated No. 23 on the ASP World Title Race rankings, Irons will be looking for a good result in Jeffreys Bay and Tahiti to survive the mid-year field reduction from the ASP Top 45 to the Top 32.

“So happy to get through Round 1 here,” Irons said. “At the last event in Brazil, I came there rated 13th, got a 33rd and dropped down to 23rd so this is an important event for me. No one is immune from that mid-year cutoff and yeah, it can be stressful.”

“I haven’t been looking at the ratings this year and just trying to focus on getting through heats,” Yeomans said. “I thought I was in the 20s or something, but 40s, wow, that’s a ways to go. It’s all good though. I’ve got through that first heat and will just be looking to push harder from here on out.”

In his first trip ever to Jeffreys Bay, Yeomans’ backhand assault was surgical on the Jeffreys righthanders as the young Californian drove through bottom turns and sliced off top turns.

“The waves today are awesome,” Yeomans said. “I’ve been here about a week and it’s been good preparation to sort out boards and try to get myself adjusted to the wave. The surf came up this morning and I saw a friend of mine, Grant Baker, in the lineup who gave me some tips for today. They obviously paid off.”