Part One: When is a secret spot no more?

I feel slightly remiss for not lodging this blog a little earlier but travel writing has to come from a non-sequential group of random experiences – not a computer. My battle hardy laptop has thus been unseen and ignored for a good four days (which I think is a reasonable amount of time to inject oneself into the Balinese bloodline). “The air was so hot when I got off the plane, my taxi driver was a real nice and dogs look hungry”, these are not worthy observations. So we’ll take them as givens. Next! 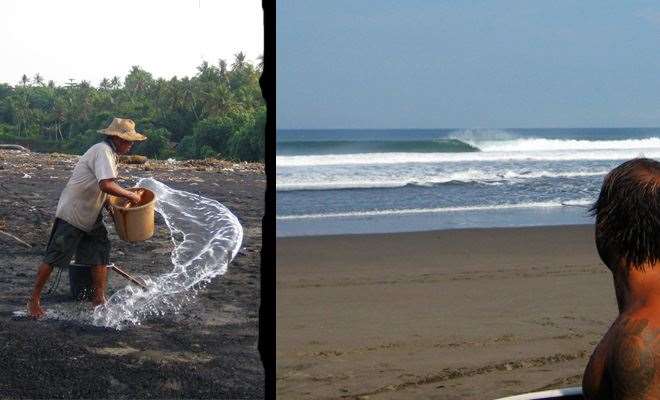 Like any other idiot tourist visiting Bali I think of myself as quite the motorbike rider when I’m here. That was until I found myself crossing oceans on a Honda. Let me explain. Talk of a secret beachie with deliciously square barrels and towering peaks has been a hot topic of conversation among those in the know and low and behold a friend of mine knew how to get there.

I’m not saying which way we went or what landmarks we may or may not have seen along the way but the pot of gold at the end of the rainbow looked amazing when we eventually got in range. Now you’re up to speed. You see the pot of gold was not at the end of a rainbow but rather a river mouth. Being we’d punched onto the beach on the “wrong side”, of this river mouth meant we had to switch our Honda automatic mopeds (okay I lied about the motorbike) to four-wheel-drive.

There was talk of turning back but once one sheep had bolted my other friend and I dutifully followed. Up to our ankles in surging tidal waves I figured our 30-meter dash to perfection had brought us undone and I was counting the tens of millions of rupee it was going to cost me to replace my trust steed. Miraculously Honda and I rose out of the depths and up onto the dry hard sand out the other end.

Unfortunately the trip wasn’t casualty free – my right thong had been dislodged in the torrent and quickly headed seaward. At first I accepted the lose as collateral damage counting my lucky strikes it wasn’t me, or worst still, Honda heading off into the big blue. Nostalgia did get the better of me though and I dropped the bike turned and ran (shorts hiked up ipod in hand) into the water chasing that Rainbow Floyd (Right). Thong retrieved and ipod dry I gathered my bike out of the sand (sorry Katut) and fanged over the dry dune to cop an eyeful of why, the early start, long dangerous ride and near bike drowning, was all worth it.

Random split ramps and bellowing off shore winds working in unison to create a surfing spectacle that keeps a surf dreamer like myself awake at night. I got it. It was a secret spot. Another car did turn up but they were lead by local ripper Rizal Tanjung – so local knowledge was in effect there. I’ve since been told that the secret is out around Bali but until I see ten Warungs and fifty surfers on each peak I’m calling, “yes!” Secret breaks still exist in Bali and I love it.

Photo explanation: (L) I don’t know why this old dude was splashing sea water over the sand and raking perfect grids into the dark textured section, I’ guess it’s good old obsessive compulsive disorder. (R) My friend in the foreground watches a bomb scream through – the surfer comfortably pitted is Rizal’s stable mate Yadin Nicol.