Like to watch your professional athletes suffer – sweat, bleed and grimace through the most gruelling tests of human endurance? Then this year  you might’ve preferred to skip the Fijian leg of the Association of Surfing Professionals’ World Tour. Frankly, it’s difficult to imagine a more idyllic sporting gig anywhere in the world. Based on the twin island resorts of Tavarua and Namotu, a short hop from one of Fiji’s largest centres, Nadi, the Globe Fiji Pro has been officially voted “the sickest surf contest on the planet” by the surfers themselves, and for good reason.

Fringed by wave-rich reefs, the waters alive with thrashing schools of yellowfin tuna, your every recreational whim catered to, these resorts are known as a surfer’s Disneyland, a kind of five-star Gilligan’s Island with waves. For two weeks the world’s top 45 rated surfers and three wildcards have the run of the place – ferried from their tropic island enclaves to any one of half a dozen quality reef breaks by courteous Fijian boatmen, three gourmet meals a day laid on, ice-cold beers and fruity cocktails served by smiling staff to salute every postcard perfect sunset from two of the world’s best located bars. Little wonder both resorts are booked out almost a year in advance, the preserve of surf industry moguls, movie stars, supermodels and the more cashed up pro surfers who swarm here outside of contest time for photo shoots or simple holidays.

It’s about ten years since pro surfing began a profound geographic and philosophical shift, from the world’s most populated seaside holiday towns in peak summer to the world’s best surf spots in prime surf season – chasing quality waves over bums on seats. What has made this shift possible, and palatable to event sponsors looking for a return on investment, is the internet. More specifically, webcasts. The only spectators at these far-flung surf spots might be a smattering of media and officials, but increasingly sophisticated webcasts carry the events live from remote tropic reef breaks to millions of internet viewers around the world. After years of chasing media deals, pro surfing has effectively become its own broadcaster, giving a whole new meaning to “surfing the net”. Thus, the world’s top surfers find themselves lolling about in hammocks, sipping coconuts, untroubled by clawing fans or onerous media duties. It’s a comfortable level of fame they endure: they might attract pretty girls, a few autograph hunters and six or seven-figure salaries, but few paparazzi, crazed stalkers or drunken pub patrons who want to punch on.

There’s the small matter of a World Championship surfing event to be contested, but the actual staging of heats almost feels like a mere sideshow to the relentless pleasure-seeking of island existence. If the surf happens to go flat, the obliging resort management will even organise helicopter transfers to the nearest golf course on the mainland to stave off any chance of boredom. This year Namotu management even flew in two chefs from two of the finest restaurants in the Margaret River region – Jim Mailes, from Lamonts in Yallingup, and Dave Underwood from Vasse Felix – especially for the event. Thus, we were treated not only to sumptuous gourmet meals every day of the week, but mouth-watering bar snacks at cocktail hour. Australia’s highest rated surfer, Joel Parkinson,  landed close to 300kg of fish over two weeks during the ’08 event, ensuring numerous platters of fresh sashimi and tuna steaks. Order a Coopers from the bar and the friendly staff will even carefully roll the stubbie on the bar first to disperse the sediment. It’s the little things. 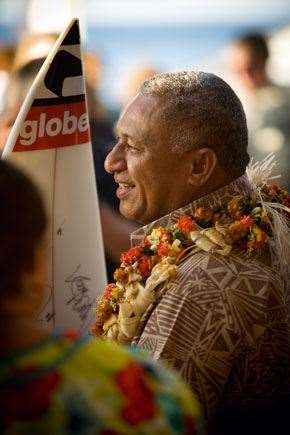 ”Frank” was another bigwig enjoying the party. Image: Steve Sherman

Thus, the two weeks of the competition window rolled by in a glorious blur of surfing, fishing, eating, diving, sailing, drinking, karaoke marathons and the ubiquitous kava sessions. The whole thing reached some kind of hedonistic nirvana the afternoon wildcard Mark Occhilupo positioned himself at the Namotu Island bar, fishing rod in hand, dangling a line in the nearby South Pacific while sipping a potent and garishly-coloured cocktail in between blasts on the karaoke machine. Apart from toileting, the guy  could very nearly have not moved for the best part of the event and gone home happy.When the surf obliges and the contest is switched into action, the spacious “Awesome Adventures” steel-hulled tourist ferry provides a well-appointed mother ship for competitors as they await their heats in pristine reef break barrels. There are two main contest venues – the open ocean reef known as Cloudbreak, sitting improbably a couple of kilometres out to sea, a specially constructed judging tower perched on the reef; and Restaurants, a mechanical, tubular left that reels away flawlessly in larger swells in front of Tavarua Island. Resort staff come out in boats to cheer on their favourite surfers from the channel and a friendly rivalry has developed between the two islands to see who can claim the contest winner each year.

The Australians stay on Namotu, generally the rowdier of the two islands, while Tavarua is home to the Americans, Brazilians, Europeans and South Africans who make up the rest of the field. The cultural quirks of the two islands are never more apparent than during lay days from competition as the Aussies make merry and run up the bar tabs, plan hit-and-run raids on neighbouring tourist resorts and generally wreak havoc. Meanwhile, the well-behaved Tavaru-ites conduct orderly tennis tournaments, play backgammon and build seashell mobiles … Namotu hasn’t hosted an event winner in eight years.As a measure of surfing and surf tourism’s importance to Fiji, last year’s event was officially opened by none other than military coup leader and self-appointed Prime Minister of Fiji, Commodore Josaia Voreque Bainimarama. Or “Frank” to his friends.

The Globe Fiji Pro had been absent from the ASP World Tour for two years since the latest in a series of military coups to upend Fijian politics was staged in 2006. The surfers had been itching for a return to paradise and the event went ahead in 2007 once organisers were satisfied the security situation in Fiji allowed for a safe event. And who better to ensure that safety than the Prime Minister himself? “I’m a navy man, and I’ve spent most of my life on the water, but this is the first time I’ve laid hands on a surfboard,” Frank announced at the opening ceremony. “I have no doubt that like sevens rugby, one day local surfers will be counted among the best in the world,” the PM predicted.

Ultimately, the ’08 contest proved yet another exhibition of the unearthly dominance of one Robert Kelly Slater on a collision course with an astounding ninth world title. In the face of Slater’s unending supremacy, the Aussie surfers in particular seemed inspired to simply kick up their heels and enjoy the idyllic setting to the fullest. Top Aussies Mick Fanning and Joel Parkinson flew their wives in for impromptu romantic holidays and stayed on after the contest finished. And a good portion of the surfers’ contest prizemoney was handed back to settle gargantuan bar bills.Pro surfing’s World Championship Tour takes in some idyllic locations these days – Tahiti, Indonesia, France, Spain, Hawaii, as well as our own Gold Coast and Bells Beach – but for sheer indulgence the Fiji leg took the cake. We’d say this is one contest where no one goes home a loser, but with the ’09 event falling victim to the world fanancial crisis and not scheduled, there won’t be any winners this year, either.