Day one of the Outerknown Fiji Pro finished on an unusual but spectacular note with Michel Bourez’s ‘ballet stall’, but as the sun rose on day two it was clear Cloudbreak itself hadn’t hit the anchors overnight.

In the first heat of the day, which was actually heat two … of round two, Joel Parkinson dispatched the fancied Brazilian wildcard Yago Dora in what was a pretty tight but average start to the day’s competition. The loss took a hammer to the hyperbole that has surrounded the ‘Skinny Goat’ since his runner up finish in Rio. Perhaps the loss will see Yago fall out of favour with the Commissioner? Will it be back to the QS grind for him in order to qualify?

If slow grind was to be the order of the day, then Sebastian Zeitz mustn’t have received the memo. He surfed with his usual zest, stuffing his freshly shorn dome into a bunch of Cloudbreak bombs, finishing with a 9.43 and 9.00 in his scoreline. Despite the waves on offer, his opponent Bino Lopes couldn’t muster a score above 5.00. A wave like Cloudbreak demands its rider to have knowledge of its intricacies, and if you don’t it will always expose you in a ruthless fashion. Seabass has this knowledge, and even shared some with strider. “It’s hard because they look like they’re gonna stretch out so far but you actually have to fade. My theory is, worry about getting in the tube first, then worry about how deep you are.”

Heat five was an interesting and somewhat cringe worthy affair – Kelly Slater matched against Ethan Ewing. The commentary team shamelessly plugged the heat as the re-birth of Kelly vs. Andy Irons, as if the spirit of the Kauaian had literally floated into the cloudbreak lineup and taken over the body of the Australian rookie.

I mean sure, make note of the fact that Ethan Ewing surfs a bit like Andy, but don't try an bill his second round heat against Kelly as a rematch between two of the greatest competitive surfers, and fiercest rivals, our sport has ever seen. Fucks sake! Ethan rips and has a bright future, but he's also yet to make it past round 2. Probably because he's so self-conscious from constantly being referred to as Andy Irons … he's not.

Anyway, Kelly dominated and Ethan was lost at sea. Perhaps the walls of J-Bay can bring the young Australian some redemption.

Note: This is Andy Irons at Cloudbreak, lest you had forgotten!

After that there were a couple of pretty snooze inducing affairs. Joan Duru bested Conner Coffin and Wiggoly Dantas took out Jadson Andre. It was up to the French firecracker Jeremy Flores to startle us back into consciousness, when he threaded one of the throatiest and largest waves of the event, before awkwardly diving headfirst into millimetres of water over the shishkabobs reef. Somehow he emerged unscathed. How many lives do frogs have anyway?

It was a brief high. The rest of round two settled back into an unspectacular grind.

The action, along with the heat totals, picked up again when commissioner Perrow sent round three into the water. The first of which featured Owen Wright against Ian Gouveia– two goofy footers – one the tallest on tour, the other the shortest. One made this wave his bitch in 2015, the other may have surfed this wave before and had a dad on tour at some point.

But, as the old saying goes, you’re only as good as your last performance. So, I guess Ian Gouveia is better than Owen Wright … for now. 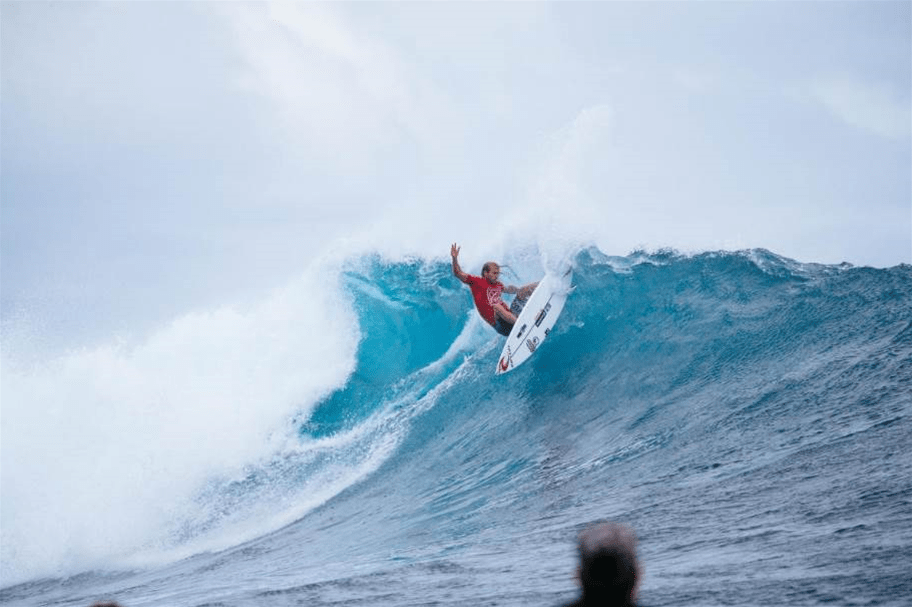 No fairytale in Fiji for Owen. Photo: WSL/Sloane

As for the remaining three heats which ran. Julian iced Frederico, Wilko smashed Pupo and coming back hot (and very much welcome) from an injury he sustained on the Gold Coast, Italo Ferreira squeaked past Gabriel in a close but delightful little tube showdown as the sun set into the Pacific.

What will tomorrow bring? Whose earthly body will be possessed by the spirit of a past great? Stay tuned!