How To Survive Easter Without Bells

For as long as I can remember Easter has been synonymous with a few things – that delicious aroma as the toaster pops up another round of hot-cross buns, parents hiding little chocolate diabetes bombs in the garden for the kiddies and, for me for at least the last ten years, it has meant a trip down the coast to surf the first real swells of the year. This is traditionally followed by prolonged couch sessions watching the Top 34 duke it out for the right to hold one of surfing’s most coveted trophies aloft in front of a cheering crowd and shaking the living daylights out of it as champagne rains down from above, the chimes of victory ringing out across the beautiful natural colosseum that is Bells Beach, Australia.

But the cancellation of this year’s Bells event is tragic for reasons far beyond selfish, sugar-fuelled voyeurism (devastating loss of life to a wretched virus notwithstanding). It is tragic because the Bells Beach Easter Rally, as it was first known, has been running consecutively since 1961 making it the longest-running surf contest in the world. 2020, sadly, will be the first glitch in an otherwise unblemished record and would have been the 60th time the event had been run. 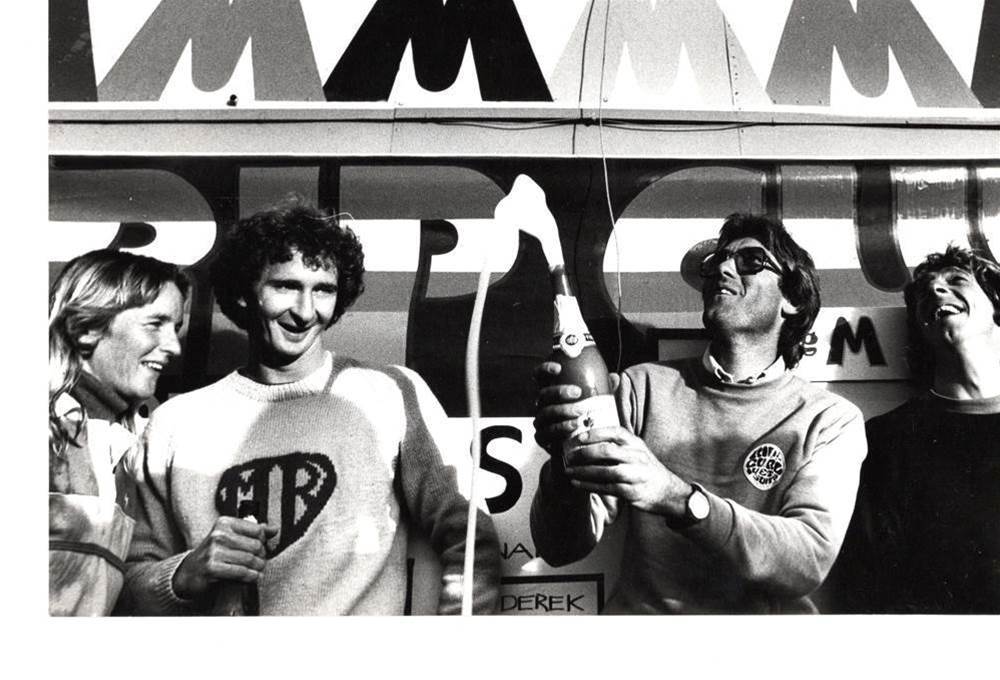 Mark Richards on the podium at Bells with Doug ‘Claw’ Warbrick popping the champagne.

You could be excused for thinking I am merely reciting a list of past world champions (barring Simon and MP who I mention purely because their legendary status demands it). In fact, the link between winning Bells and winning world titles is undeniable. So much so that the winners of 34 out of the total of 59 events have won a world title at some point in their career, and a staggering 15 times the winner at Bells has gone on to win a world title in the same year.

Much the same is evident when reviewing the women’s list of winners as well with Wendy Botha, Pauline Menczer, Lisa Anderson, Layne Beachley, Stephanie Gilmore and Carissa Moore all taking home a Bell Trophy in the same year they got to place a world title trophy alongside it on the mantlepiece (Anderson, Moore and Beachley were all able to achieve this twice and Gilmore, an impressive three times).

Over the years the Bells Trophy has become almost as iconic as the event itself. For more than 30 years before his death at the age of 80, local surfing identity and former Olympic wrestler Joe Sweeney hand-crafted them in his garage not far from the famous break. And Joe was the same legendary guy who reportedly paid a farmer the princely sum of 32 pounds to bulldoze the first road down to Bells Beach, modifying an existing Cobb & Co stagecoach track. 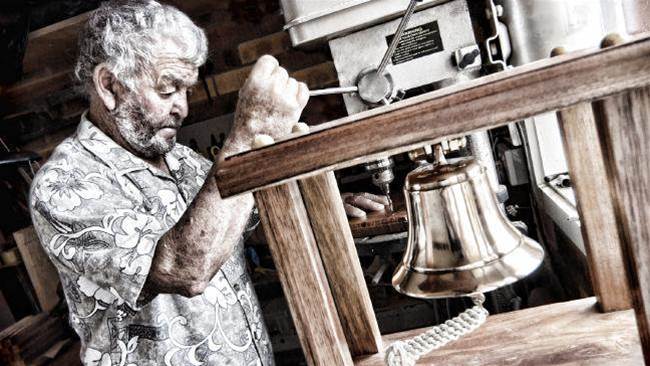 The late Joe Sweeney and the famed Bells trophy he was responsible for making for more than three decades.

A year after the Bells Beach Easter Rally’s debutant year in 1961, it became known as the Bells Surf Classic, as it stayed right up until 1973 when Rip Curl began to sponsor the event. It has been known as the Rip Curl Pro ever since. Well, that is with one slight exception – in 1984 Australian Crawl became the first rock band to co-sponsor a professional surfing event. Known as the Rip Curl/Australian Crawl Bell’s Beach Surfing Festival, the event was taken out by Aussie fan favourite (and winged-keel fin advocate) Cheyne Horan.

So as April 2020 rolls around, how do we survive this low-point in Australian surfing history? With such a rich past behind it, how do we find happiness this Easter without watching John John taking off at Rincon or Wade Carmichael carving inside The Bowl, or my new favourite ‘CT contender, West Aussie Jack Robinson flying down a Winkipop wall? I’m not going to pretend that it’s going to be easy. I may even shed a tear at some point over the long weekend in mourning of what we have (temporarily) lost. But I have a plan!

But before I let you in on what that is, I want to be clear here – I am not condoning video piracy. But I know that you can find a lot of cool stuff online and, to be honest, I’m not even really too sure how that works with publishing rights and all that legal mumbo jumbo. All I know is, my smart TV has a video player app and I am praying that my favourite Bells moments are there in all their glory for me to relive and enjoy come Good Friday.

Here are my recommendations for what we should be searching for:

Mark Richards 1978 – The first year MR won the coveted trophy. He eventually claimed it four times, a feat only repeated twice more (so far) by Mick Fanning and of course, the GOAT, Kelly Slater.

Simon Anderson 1981 – Arguably the most iconic (and impressive) win, partly because it was held in 15 to 18-foot surf, the biggest the event has ever seen, but also because it was the year Simon Anderson rode his tri-fin “thruster” design to victory, changing board design for many years to come.

Occy! Pretty much any footage you can find of Occy at Bells is bound to impress. In 1997 he won the non-CT Rip Curl/Surf Dive N Ski “Skins” event (modelled off of a golfing format) where he got to drive away in a brand new Jeep Wrangler that he bunny-hopped through the carpark in front a hysterical crowd because, by his own admission, “I didn’t know how to drive a manual”.

Occy also won the Rip Curl Pro in 1998, his first world tour win in 12 years, which is worth a look and his1985 semi-final duel with Tom Curren (which Tom won) is considered one of the all-time Bells heats.

Above: Skip to 39 minutes and 45 secs mark for the immortal Occy vs Curren clash. Then watch the rest. ‘Surf into Summer’ will make you fall in love with the 80s all over again.

And if there is still time and I haven’t quite filled the hole in my heart, I know that I will enjoy any footage I can find of Mick or Joel at Bells, and the Fanning vs. Slater final in 2012 is well worth a watch too.

Fortunately, it is not all doom and gloom this Easter. Whilst we sadly won’t be seeing any live action at The Bowl, luckily for us, the event has offered up so much classic surfing over the years that a rich treasure trove awaits us online. Time to whack a hot-cross bun in the toaster, fill a bowl with choccy eggs, hit the couch and dip into the vault to relive past glories, and start looking towards the future to a time when this damn virus will finally be out of our lives and the bell shall ring again.

The post How To Survive Easter Without Bells appeared first on Tracks Magazine.