Kelly To Build New Pool In the Californian Desert

Kelly To Build New Pool In the Californian Desert

But as man-made waves takeover, what effect will have they on line-up etiquette?

Yesterday Kelly Slater announced plans to build the world’s largest man-made wave in La Quinta, California, in the desert at Coral Mountain. The rise and rise of man-made waves is now both undeniable and inevitable.

The centrepiece of Kelly’s complex will be a wave that has room for roughly 25 surfers — about five on the main wave, 10 each on the smaller waves at the ends of the basin with a view to catering to all levels of ability and preference.

In an aside, it says the project will lose less water than the golf course that was originally planned for the site, which isn’t really saying much. While a golf course uses as much as 1 million gallons a day, Kelly’s pond would lose 18 million gallons a year in evaporation. Which in a desert, after a few summers of drought, still seems quite a lot, but we might save that for another article.

This new pool, slated to open in 2022, will be close to another man-made wave operation that is being built at Palm Springs using the same BSR technology that exists in Waco. They will add to with the Wavegarden public facilities currently in Surf Snowdonia in Wales, The Wave in Bristol, UK, and Melbourne’s Urbnsurf. However, another 28 Wavegarden projects are in development across five continents with new centres set to open in South Korea, Switzerland Brazil, USA and Scotland next year.

So this tech is here to stay. The impact of the wave pool revolution, however, will be hard to predict. I recently had my first experience as a paying punter at a Wavegarden facility. Overall it was a positive experience with the novelty of catching 20 or so waves in an hour session, both exhilarating and exhausting.

However, it was intriguing to be in a line-up that operated under a complete set of new rules to the ones I have been operating under in the ocean for the last 30 years. I was in a group of 10 or so surfers, with varying levels of ability. There were young guns far better than me, a few around the same level and then a couple of 30-somethings that, while capable of riding the wave, were constantly veering towards the kook spectrum. So your average line-up then. 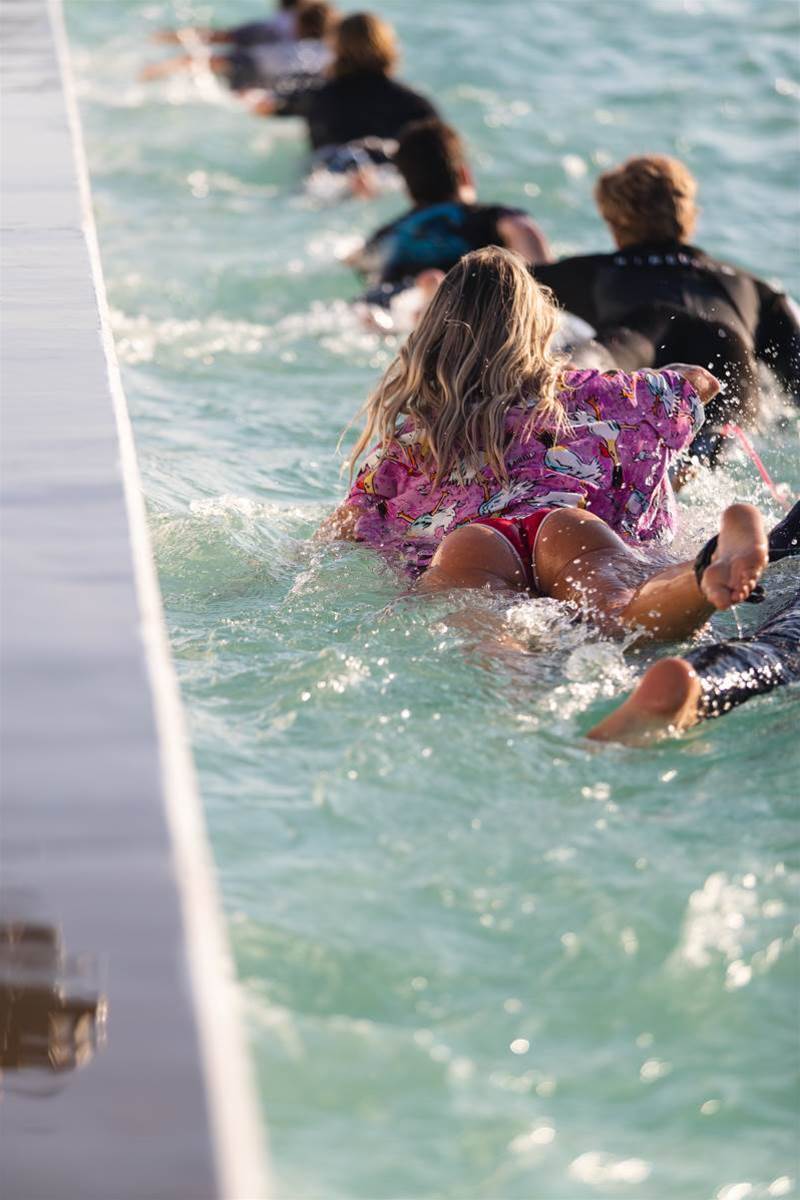 The crew joins the orderly queue for a wave at the recent Mambo surf day at Melbourne’s URBNSURF wave lagoon.

Unlike in the ocean though everyone took their turn. As you paddle out back to the small tight corner of the takeoff zone, everyone queues. When it’s your turn, it’s your wave, regardless of your ability. It’s a strange feeling knowing that you might have the ability to go deeper, or takeoff later, than the guy struggling to get to his feet on his turn. If your inner froth (or snake) is too strong there is a lifeguard perched a metre above the takeoff to make sure all the rules are enforced.

On the flip side, there is a simple fairness to the process. Getting a wave doesn’t revolve around the usual lineup variables; your ability, how aggressive you are, how big your board is, whether you have testicles or not and if you grew up there. Everyone has paid the same coin to surf so everyone gets the same opportunity.

Now over the course of the session fitness does play a part and those that fall off more often are washed in and lose time. The fitter surfers who make fewer mistakes will catch more waves. And, to be fair, the sheer amount of waves meant I was often needing a breather rather than surfing another wave.

Yet the line-up etiquette is fundamentally changed or maybe for once actually enforced. Localism doesn’t exist and every surfer is on a level playing field. As more and more surfers fill these pools, and eventually every surfer will, it will be interesting to whether this new lineup level playing field will infiltrate the one in the ocean? Are we on the precipice of a new, kinder, fairer, surfing world order? Or will the survival of the fittest eventually take hold in the tubs? You tell us.

The post Kelly To Build New Pool In the Californian Desert appeared first on Tracks Magazine.