I can remember when I was a grommet it seemed like the surf at Manly Beach was always huge. I’d spend hours watching the best surfers such as Baddy Treloar, John Otten, Michael McCormack, Jack Knight, Ian Goodacre, Peter Frazer, Robbie Holt, and a host of other local legends surfing North Steyne, Fairy Bower, and Queenscliff Bombora when the swells were massive.

I was too young to even contemplate venturing out in those heady days and even when I grew older, giant surf was never on my radar. However, whenever older legends and big wave pioneers were mentioned, Manly’s Bob Pike was always talked about in reverential tones.

I never saw Pike surf but the stories and legendary photos you saw of him in surfing magazines gave you an understanding of the affinity he must’ve had with the ocean.

My interest in Bob became even more profound when I met him. I realised early on that I wasn’t going to be able to make a living out of surfing and smoking pot so I joined the NSW Fire brigade and after a few years, I was transferred to Narrabeen Fire Station where my Station Officer was none other than the legendary, Bob Pike.

Pike was born 20th May 1940 and was taught the fundamentals of surfing by his father. He entered his first competition in 1954 at the age of fourteen. Not long after he was traveling the world, searching for that endless summer. He soon emerged as one of Australia’s most famous surfers and a pioneer of big wave surfing. Early on, he answered the call of Hawaii and journeyed to the islands in pursuit of the heaviest waves. It was a time when such pilgrimages were far less common – particularly for Australians. He rapidly earned the respect of the Hawaiian trailblazers like Jose Angel, Buzzy Trent, Pat Curren, Ricky Grigg and Greg Noll. Pike was seen as a peer, someone with the guts and skill to explore the next realm of big waves. He was one of the few willing to ride Pipeline in the early days. 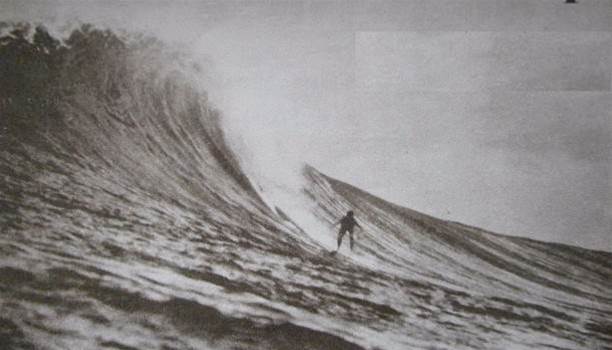 Pike, plummeting down the face of a giant wall in Hawaii.

He disliked the professional competitions that started taking over the sport after the 1960s even though he was the first Australian to win an international event in Peru in 1962, beating the best surfers from Hawaii, California, France and Peru. [Note: Felipe Pomar of Lima was in fact the official winner of the 1962 Peru International; Although a prominent big wave rider, Pike won what was often called the “shorebreak,” or small-wave performance, event. Source: Encyclopaedia of Surfing]

Not long after the victory in Peru, Pike rejected the world of competition, but his love of free surfing never dwindled. He was quoted as saying:

‘I live for surfing giant waves. I can’t resist them and the urge to paddle out and try to ride the biggest waves of all is the most exciting thing in my life’.

I had the privilege of being stationed with Bob for ten years and gained a remarkable insight into his extraordinary life.

Bob was always humble when it came to his surfing exploits but I used to squeeze him for information about his intrepid early life whenever I could.

I experienced, to a small degree, his ultra-competitive spirit via the games of tennis we used to play in order to keep fit for the fire brigade. He was relentless and I never got a free point when playing him. Bob was a great leader and it was a memorable time working with him.

Bob was an adventurer at heart and his love of the ocean never ceased. He was also a remarkable windsurfer and from all accounts an absolute freak when it came to extreme white-water rafting. He was always going away on water-based adventures and never lost his lust for surfing big waves. Although injury curtailed his surfing in his later years, he still maintained a keen interest in the ocean’s fluctuations. I remember him constantly studying weather maps and patterns, working out when the big swell was on the way.

After working with Bob for over a decade I became an Officer and moved on from Narrabeen Fire Station. We kept in contact and some years later he retired from the Fire Brigade to move to his property on Queensland’s Gold Coast.

Unfortunately, he struggled immensely after his retirement and it was a sad day when news came through in 1999 that one of our most respected, big- wave legends had passed away.

Bob’s memories and the wonderful legacy he left behind will never be forgotten.