The current position for the WSL seems to be that they will not be taking any major initiatives involving the running of events until after June 2020. Hopefully, by then some of the covid-19 miasma will have lifted and it will be possible to make clear projections about when we are likely to see the world’s best surfers pulling on jerseys again.

Meanwhile, other sporting organisations around the world are scrambling to make contingency plans. In Germany, soccer players have returned to practise and the national league, the Bundesliga, is aiming to commence empty stadium matches in early May. In Australia, the NRL are bending over backwards to get Rugby League players on the field as soon as possible and there are already major discussions in place relating to the AFL, and cricket tours to Australia later in the year.

Some probably feel that it is too soon or insensitive to talk about the return of sporting fixtures. Others subscribe to the theory that we need a distraction in these dark times – something other than contest re-runs.

The reality is that the sporting codes are business operations like any other organisation and will have to formulate strategies to make the long, slippery-ladder climb out of the covid-19 slump. As it stands the WSL has agreed to pay all WCT surfers the equivalent of last place ($US 10 000 for men and $US 10 500 for women) for any of the cancelled events. With no major sponsorship dollars coming in, that alone is going to put quite a drain on finances for a WSL that is widely rumoured to be running at a significant loss – even in good times. Billionaire owners of the WSL Dirk and Natasha Ziff apparently have very deep pockets, but surely they’d like to see their pet, surfing project back in the public eye before the year is out.

While it may be too soon for the WSL to lock in any firm plans there is no harm in contemplating the possibilities. Various WSL insiders have suggested that it may be an opportunity to experiment with a few different concepts – particularly if it’s not possible to run a world tour and crown world champion this year. The surfers will be an integral part of the conversation relating to any initiatives taken – they have plenty of ideas and skin in the game too. However, the WSL generals, led by new CEO, Erik Logan, will ultimately make the call. Meanwhile, that doesn’t mean we can’t thrash out a few blue-sky concepts the fans may like to see.

A Pacific Islands Series for the WCT

While Indonesia may be a no-go zone right now the Pacific Islands have some of the lowest instances of covid-19. Although lock-down laws in Tahiti currently prevent surfing, pulling off a three contest Pacific series in Tahiti, Fiji and Hawaii could be achievable by year’s end. What would it mean in terms of rankings? The general consensus is that there has to be five events held to justify a legitimate title race. An event for the men and women in Tahiti and Fiji, followed by a three contest series in Hawaii certainly sounds enticing.

Such a scenario would give fans a chance to see the women at Teahupoo and Pipe and maybe the men at Honolua Bay alongside the women? Alternatively, all three events could be hosted on Oahu – Pipe, Sunset and Haleiwa. If the other Pacific locations prove too difficult it could be a straight out five comp series in Hawaii where the virus, as yet, has not had a huge impact. 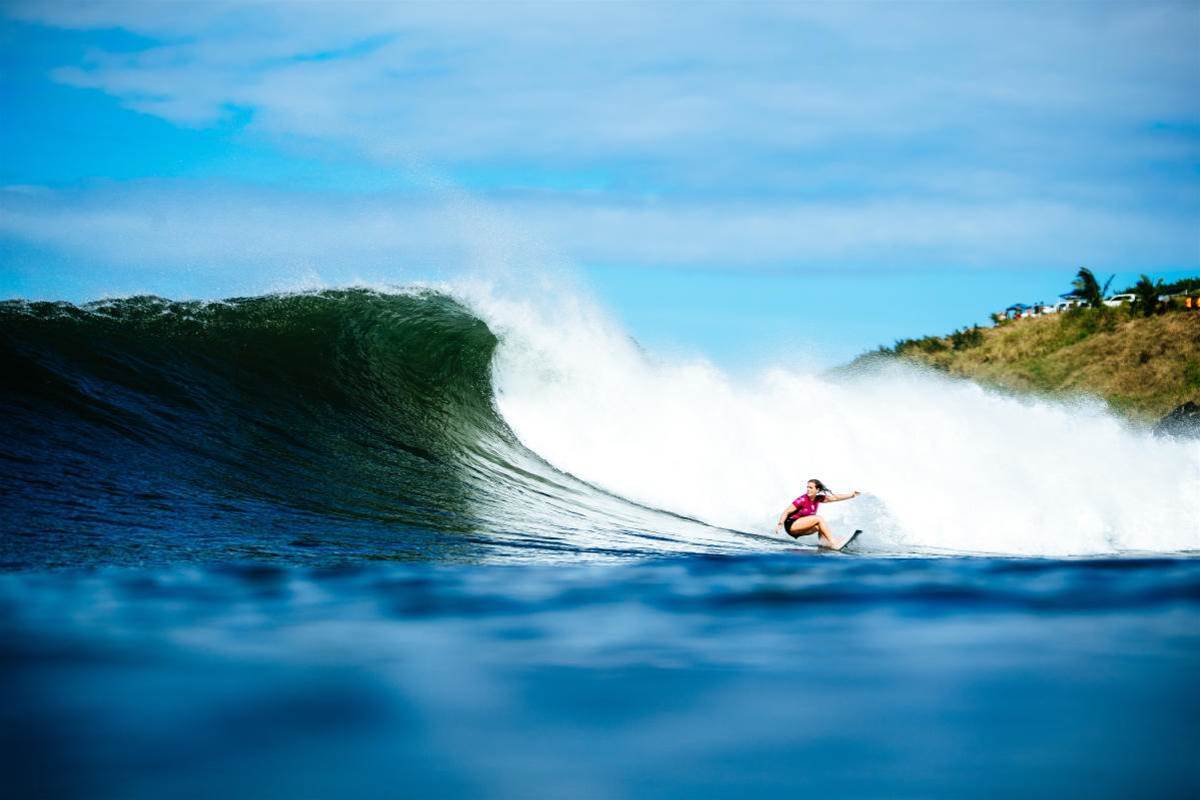 It would be a buzz to see the men and women compete at Honolua Bay. Caroline Marks applying her highly regarded backside attack at Honolua. Photo: WSL/Ed Sloane

The current WQS, which expects surfers to fly all around the globe is frequently criticised for being too expensive for surfers. Many argue surfing is in danger of becoming a rich kid’s sport. There is already a push to make the qualification process more regionally based. With international travel in limbo at present, why not give it a shot. For example, Australian and New Zealand, Europe, North America, South America, Indonesia and Japan, and Africa might be considered regions. Five major WQS events are held within each region and each region is allotted a proportioned number of WCT qualification spots based on historical results and surfing population. E.G Australia, North America and South America may have seven slots each. Africa or Indonesia would not get so many. The details would have to be nutted out, but it could be an option for this year or the future.

Maybe not everyone can come to the party. It might be too hard to pull off. However, a lean event featuring only surfers who have won world titles would be incredible to watch. John John, Gabe Medina, Italo, Adriano and Kelly with maybe a Mick or Parko thrown in as a wildcard. Steph Gilmore, Tyler Wright and Carissa with three wild cards – perhaps world junior champions or celebrated runner-ups like Sally Fitzgibbons, Lakey Peterson, and Courtney Conlogue. This could be held at a dreamy location like Honolua Bay. Or just make it simpler? What about only John John and Gabe in a five-set/heat surf off at Pipe and only Steph and Carissa at Honolua using the same format? You would pay to see those matchups in one day of pumping waves.

Who needs the Olympics when you can build a format involving say the top six or eight ranked surfers from a range of different nations (an even split between men and women). The WSL trialled something similar a couple of years back at the wave pool, but the system used for the Australian Board Riders battle is already a proven entertainment machine. It’s ready to roll out. Alternatively, it could be tweaked to involve more of a Davis Cup-style format involving individual matchups, mixed doubles and a final teams event with points accumulated along the way. This could be hosted in the pool in Lemoore, California (if the curve flattens) or preferably at a quality ocean break. Or even the Melbourne URBNSURF complex if the WSL were willing to use someone else’s pool. If international travel is a complete no-no then this could be employed as a state of origin idea. E.G State vs State in Oz. East Coast vs West Coast in the USA. All featuring the highest-rated surfers from each region.

It’s not like it hasn’t been done before. In 1979 it went flat for the 2SM Coke Surfabout on Sydney’s Northern Beaches. Contest director Paul Holmes responded by hiring planes and flying the remaining 12 surfers (11 showed one went domestic) to Bells for the finals. Cheyne Horan ultimately beat Larry Blair in pumping conditions.

If the WSL can only host one contest then why not swing big. Based on the current status of the pandemic then Australia seems like the most likely location to pull this off. Chartering a plane right now is probably going to be cheaper than ever. Three locations – Snapper, Bells and Margarets – in play but only a single, two-three-day swell needed at any one of them to run the event. The big obstacle here would be keeping crowds away if social distancing measures are still in place.

An Individual Event in Kelly’s Pool in Lemoore

This is probably the least exciting, but most achievable idea if the covid-curve starts to flatten in California. Again if there is only one event, we will watch a pool comp because everyone will be hanging out to see the WCT surfers in action. Again, if the USA is off-limits would the WSL entertain the thought of an event at the wildly popular URBNSURF complex as opposed to the Kelly pool, which is co-owned by the WSL?

The year may end up being a complete write-off, however, if it is within the realm of possibility I think most fans would love to see the WSL pull something off.

Our expectations have dropped in every facet of our lives so, providing they can meet the covid criteria, it’s the perfect opportunity for the WSL to take a risk and try something. Nothing to lose.

What sort of event or events would you like to see?

The post Will the WSL Get Creative in 2020? appeared first on Tracks Magazine.